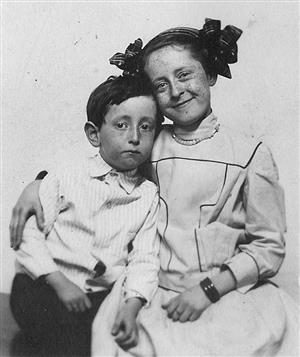 "THE 844": EDWARD MADE MULTIPLE TRIPS THROUGH THE MORGUE

Cora and John Hipple took their children Hazel and Clifford (pictured below) on board the Eastland on July 24, 1915. Hazel was 13 and Clifford was 8. The family of four went along with Cora's parents -- Edward and Eva "Anna" Stamm. Edward and Anna's other two daughters, Luella and Izella, were supposed to attend the Western Electric picnic and excursion as well but ended up staying home with their sick children.

Of the family of six who boarded the Eastland, only the two men survived.

The continual flow of bodies being brought into the morgue necessitated families having to make repeat trips through the ghastly procession -- and Edward Stamm was one of them. Edward recalled in despair viewing the hundreds of bodies at the morgue, where “they found Anna about five o’clock that day, and Hazel and Clifford about 9:30 a.m. the next day and Cora about 2:30 that afternoon.”

The family was buried at Waldheim Cemetery.