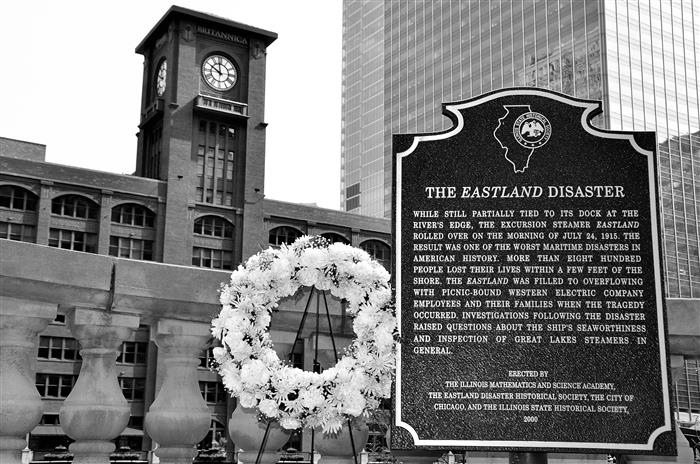 Chicago, Illinois -- The Eastland Disaster Historical Society graciously hosted the Eastland Disaster's 100th Anniversary Commemoration Weekend this past July 24-26. Our plans for the weekend were thoughtfully made to ensure that families – from across the world – were connected to other families, and also to the history of the Eastland Disaster. Our plans were also made with our seniors and out-of-town guests in mind; we ensured that all events were within a very short (one block) walk of the site of the tragedy on the Chicago River. The only thing left to chance was the weather. Fortunately, we were blessed with beautiful weather throughout the entire weekend.

Friday, July 24 was the 100 year anniversary of Chicago's greatest loss-of-life tragedy. A commemoration ceremony was held outdoors along the new Chicago Riverwalk at the exact site of the Eastland Disaster. The central theme for the ceremony focused on the response to the tragedy, with keynote speakers representing the City of Chicago and its first responders. EDHS executive director Ted Wachholz opened the ceremony and introduced Alderman Ed Burke, U.S. Coast Guard Chief Warrant Officer Kyle Chapman, Chicago Fire Department Deputy District Chief Ron Dorneker, and Chicago Police Department Lieutenant Allison Schloss. EDHS co-founders Susan Decker and Barbara Decker Wachholz then addressed the crowd. To close the ceremony, the estimated crowd of more than 750 observed a moment of silence as memorial flowers were placed into the Chicago River by the marine units from the U.S. Coast Guard, CFD, and CPD. The crews of these marine units saluted as the flowers drifted from their respective boats, all in remembrance of the 844 souls who died and the thousands of others who were involved.

At 8:44 p.m., a city-wide commemorative toast was held in honor of the 844 victims and the thousands involved in that fateful day. Many people from the area and across the country posted the photos of their personal toasts on social media. EDHS staff and board met at River Roast and respectfully raised a glass of The 844 Commemorative Beer (brewed by Ale Syndicate specifically for the 100th anniversary) to remember the 844 Chicago lost 100 years ago.

The victims and all who were involved in the tragedy were also honored when Illinois Governor Bruce Rauner sent out the following Tweet on Twitter:

Saturday was a day packed full of featured events for the families. The day began with an early morning cruise along the Chicago River and the Lake Michigan shoreline. Hosted by Wendella Boats, our partner for over 10 years, 250 people boarded the chartered boat. After we cleared the docks and headed out onto Lake Michigan, several dozen families took turns at the microphone while sharing their families’ legacies.

At 11 a.m., EDHS hosted its second outdoor commemoration ceremony at the Riverwalk. The central theme this time focused on the families involved in the tragedy. The ceremony began with a song written in 1915 about the Eastland Disaster called "The Boat That Never Left Town." The song was sung by Eastland Disaster descendants Barbara Decker Wachholz (granddaughter of survivor Borghild Aanstad), Kelly Barwick (great-granddaughter of Sylvia Kase, who narrowly missed boarding), and John Boda (grandson of survivor Anna Bohn), along with Morgan Buckley, Peter Buckley, and Nanette and Paul Sowa. Michelle Woods, a 15-year advocate and friend of EDHS, addressed the crowd as a representative of the City of Chicago and the Mayor's Office. Two families spoke after Michelle. First was Kathleen Kremholz, niece of Marion Eichholz (the last-known living survivor of the Eastland Disaster who passed away in November 2014). Following Kathy were Carol Gilchrist and her daughter Pamela Gilchrist Corson, the daughter and granddaughter of survivor Marie Hrabacka. Kathy and Carol both spoke at EDHS’ first event, the 85th anniversary commemoration held in 2000 at the Museum of Science and Industry (which included the Titanic exhibit). Susan Decker, EDHS co-founder and granddaughter of survivor Borghild Aanstad, closed the ceremony.

The most touching moment during the morning ceremony was the quiet memorial held at the conclusion. Descendants and relatives connected to the tragedy walked to the edge of the river to drop white rose petals into the water in honor of the 844 victims. The white petals floated down the Chicago River; boaters and kayakers passing by couldn't help but pause and be moved by this memorial.

Immediately following the commemoration ceremony, families walked directly across the Chicago River to attend a luncheon hosted at the River Roast Social House. Located in the Reid Murdoch Center building, guests enjoyed a delicious plated lunch, with dessert featuring River Roast’s famous homemade banana caramel cream pie. The Reid Murdoch Center building is historically significant to the Eastland Disaster. The first floor was used as a temporary hospital, and the basement became a temporary morgue after the ship capsized yards away. By dining at River Roast, lunch guests were directly connected to the history of the tragedy.

Attendees then walked one block east to the Westin River North, where EDHS hosted the Connecting Families Program. Guests had the opportunity to chat one-on-one with the 11 Eastland authors, purchase books and soundtracks, take photographs, and have their books signed. Ted Wachholz opened the program and welcomed everyone before introducing the panel of authors. Emily Cranfill, EDHS Education Intern, moderated the authors’ discussion. For 90-minutes, attendees had the opportunity to ask the authors questions in all areas of the tragedy.

Following the authors’ panel discussion, Joe Popa, Executive Creative Director of 88 Brand Partners, described the creative process to developing EDHS's new brand, visual identity, and messaging. Joe also took an extra moment to relate his own personal connection to the Eastland Disaster -- he lives in the home originally owned by Nicholas Suerth, a victim of the Eastland Disaster. Emily Cranfill returned to the stage and described the education initiative for the Eastland Disaster upon which she is working as a volunteer. Caitlyn Dial followed Emily on stage and presented interesting concepts relating to her dissertation focused on the historical consciousness of the tragedy.

The balance of the afternoon shifted to the families sharing their connection to the tragedy. Descendants of survivors, victims, and responders took turns standing up in the crowd and relating their families’ experiences from July 24, 1915 – their struggles to survive, their loss in the tragedy, and their heroic efforts of coming to the rescue. One notable moment was when the Fitzmaurice family, who traveled from Ireland and Canada, shared their story of their ancestors. EDHS surprised the family by uncovering a photograph of their relatives, Catherine and Hanora Moynihan, both young victims of the Eastland Disaster. A performance later in the afternoon by Kelly Barwick moved the audience. Kelly sang "Sylvia's Song," a new song written about her great-grandmother’s near brush with death in the Eastland Disaster. The song is a companion piece to “Sylvia’s Story,” an educational resource/book written for junior high students by Kelly's mom Sue Barwick and Mary G. Furlong. Carla Gerts, owner of Windy City Connection, and Liz Garibay, owner of History on Tap, talked about the tours on which they are working based on the Eastland Disaster. Liz also talked about the idea behind the brewing of “The 844,” the commemorative limited edition beer brewed to respectfully share the history of the Eastland Disaster.

Families then took a break to grab dinner on the town with their loved ones and newfound friendships, and later reunited back at the Riverwalk for the Sunset Commemoration Ceremony and Concert at 8:30 p.m. The ceremony kicked off with three songs being performed live from the Lookingglass Theatre Company's award-winning "Eastland: A New Musical." They sang "A Summoning," "Parade of Souls," and "Only the River Remains." At 8:44 p.m., 844 battery-operated votive candles illuminated the Riverwalk in a moment of silence and remembrance of the thousands affected by the Eastland Disaster. The candles lit up the Riverwalk, and only the sound of gentle waves and boats passing by was heard. It was truly a moment that will never be forgotten. It was also an opportunity for passersby to learn about the tragedy.

The weekend’s events concluded as families gathered at the Museum of Broadcast Communications for an open house and tour. EDHS co-founders Susan Decker and Barbara Decker Wachholz were gracious hosts for those who walked through the museum.

The commemoration weekend's bi-fold brochure is available for download here. (For best results, select the options to (a) Print using both sides, and (b) Flip on short edge.)

Photos from the commemoration weekend are available on the EDHS Facebook page.