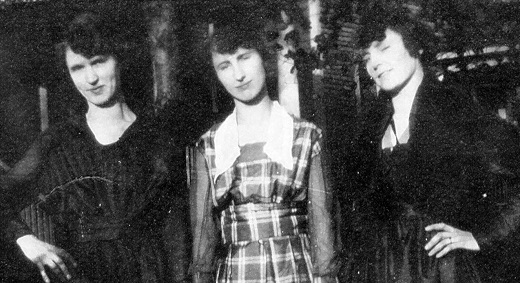 ...hated to talk about the tragedy...

Like so many others, Anna Bohn had her dream job at Western Electric's Hawthorne Works in Cicero. She lived in Cicero with her two sisters, Rose and Clara, who also worked at the Hawthorne Works.

Anna and her sisters had a difficult childhood, with an alcoholic father who was not home much and a mother who was not much help raising the children either. Anna, her two sisters, and her two brothers spent years in an orphanage growing up, and the future did not look bright until getting their dream jobs at Western Electric.

Anna had just turned twenty years old a few weeks before boarding the Eastland on that fateful day. She was possibly joined by her two sisters, although that hasn't been ascertained. Anna ended up staying on the deck outside with the crowds rather than going down below where so many drowned or were crushed.

Anna hated to talk about the tragedy and only recalled it by saying it was "a terrible day." But she did mention that "someone" told her to move to the other side, an act that probably saved her life. The "someone" was possibly Charles Silvernail, the assistant to Chief Engineer Joseph Erickson. Erickson had ordered Silvernail to have people move over to the starboard side as much as possible to help offset the list to port.

Anna was most fortunate in being near the starboard side when it capsized, and she likely crawled over the rail as many hundred did and awaited rescue on the ship which had rolled onto its side in the Chicago River.

Anna later married and had two children, Henry and Eleanor.

Anna would live into her eighties but refused to speak much about the Eastland. In her final years, she lived with her son Henry who was a retired Cicero Policeman. Henry loved to take his large motorboat out into Lake Michigan and would often ask Anna to come with and enjoy the rides. She always refused saying that she would never get into a boat ever again!