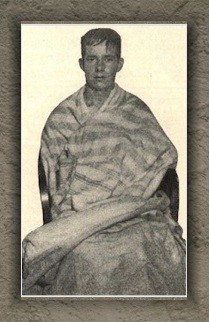 Charles R. E. Bowles is the star hero of them all: a 17-year-old volunteer diver who explored the hull of the Eastland, a place where professional divers refused to go. He went by the name Reggie and was the son of a Western Union wire chief. He and his family lived on North Springfield Avenue in Chicago.

He was known to be an expert swimmer. When only 11 years old, he rescued two companions from drowning; and in 1914 saved a baby from a burning building at 63rd and Halsted.

On the morning of July 24, 1915, Reggie's friend was among the eyewitnesses of the Eastland Disaster. He called Reggie at his automobile repair shop at 3958 Springfield Avenue. When Reggie and his brother Berwyn received the call, they hurried to the Clark Street bridge on a motorcycle.

When they arrived at the scene of the tragedy, welders had begun to cut into the hull of the Eastland. He wasted no time in putting on bathing trunks and was among the first to enter the murky water in the hull of the "death ship," working without any professionals tools.

Although Reggie was repeatedly warned, he dived into remote parts of the ship, rarely coming to the surface without a victim's body. Throughout the day he labored, and was on hand the next morning as soon as it was light enough for him again to enter the ship. On one trip he brought back two bodies -- a mother clasping her baby rigidly to her breast.

Several times first responders advised him to let others do the work, but Reggie was relentless until dusk. He was nearly unconscious from fatigue, and Major Funkhouser ordered he be carried to his car. Reggie was driven to the detective bureau where he was given hot coffee and wrapped in a blanket.

But he kept pleading, "Just let me rest a bit and I'll go back."

He added, "I can stand it when the professional divers cannot, because they keep stimulating themselves with whiskey and the effect wears off, but I don't touch it. I want to go on with the work, because I know where there are several bodies. There are three or four under a steel plate that fell in when the men were cutting out sections, and there is another - the body of a woman - wedged under an ice box. I will be back tomorrow." Physicians warned him against further efforts, as they feared pneumonia or typhoid would set in.

Reggie earned the name "The Human Frog" by the veterans who marveled at his exploits as he worked from morning until dark, and even then, he would not quit his self-imposed task until he was forcibly placed in Major Funkhouser's automobile and taken from the scene of the tragedy. He recovered 40 bodies from the wreckage, many of whom were women and children.