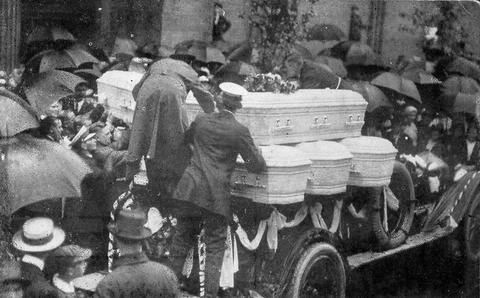 ...the largest family to be completely wiped out...

On the morning of July 24, 1915, Regina Dolezal tagged along with her sister Josephine's family, the Sindelars, and boarded the Eastland to enjoy a day of fun and merriment. Josephine's husband, George, worked as a foreman at Western Electric, and Regina was looking forward to spending the day with her sister, brother-in-law, nieces and nephews.

The Sindelar family is the largest of the 22 families who were completely wiped out in the Eastland Disaster. George and Josephine Sindelar, their five children: Adella (15), Sylvia (13), George Jr. (9), Albert (7), and William (3), and Josephine's sister, Regina, all lost their lives in the Chicago River.

It took days to retrieve their cold bodies from the river, with the bodies of Josephine and little William being recovered the third day after the tragedy. The chaos, confusion and grueling identification process in the temporary morgue led to the double identification of several victims – two or more families claiming a single body as their loved one. Josephine Sindelar’s body was one that was identified by two different grieving families.

The first identification was a mistake that fortunately was questioned by Josephine’s mother, Clara Dolezal, before the body was removed from the morgue. Clara recognized the suede shoes that protruded from the blanket covering Josephine’s body. Clara cried out: “This is Josie! This is Josie! But if you doubt me, look into her mouth. Josie has two small rims of gold on her front teeth.” Josephine's mouth was opened – two narrow rims of gold were found.

A joint funeral service was held for the whole family on July 28, 1915, in the Masonic Hall on Oakley Avenue. Thousands came to honor the family as waves of flowers, wreaths, ribbons and palms rested atop the three large caskets and five small caskets. It was said that not a dry eye remained as the caskets were set outside for transport to their final rest. The photo above shows the eight caskets — one each for Regina, her sister Josephine, and Josephine's family — outside the Masonic Hall during the funeral. The family now rests together at the Bohemian National Cemetery in Chicago.