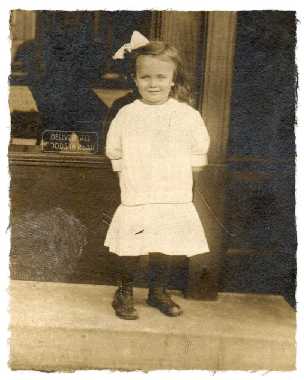 ..."Suddenly the boat listed and I fell against the railing"...

Marion Eichholz had just turned three years old on July 12, 1915. She told her recollection of the Eastland Disaster to her sister, Shirley Eichholz Clifford.

"July 24, 1915, was a very tragic day in Cicero. It was the day of the Eastland Disaster. I remember only a few incidents of that day. My mom, Anna Eichholz, and my dad, Fred Eichholz, were seated on the upper deck, and I was standing by Mom's chair. Suddenly, the boat listed and I fell against the railing. Mom pulled me back to her side.  Mom began yelling, 'Run to the other side of the boat!' People began to panic, and women were running and screaming. Dad picked me up in his arms, stood on the railing, and jumped into the river. I believe he told Mom to go to the other side of the boat, but because there was so much panic, Mom stayed in her seat. When the boat went over, she floated from the seat into the water. Someone threw her a rope, and she was rescued. I remember Dad swimming with me in one arm. I was crying, and my strap slippers were dangling from my ankles. We were picked up by a tugboat and brought to shore. I do not remember this at all.

"A reporter came from one of the newspapers and took my picture in front of 4821 W. 23rd Street. They wrote "Rescued" at the bottom of the picture. However, I do not know whether the picture ever appeared in the paper."

Marion was the last known survivor of the Eastland Disaster. She passed away at the age of 102 on November 24, 2014.