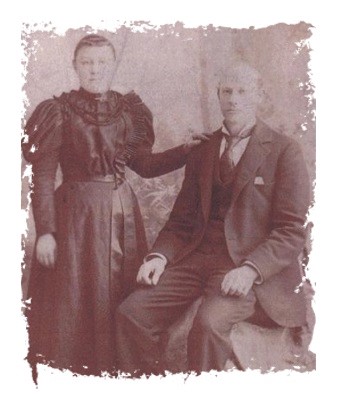 ...watched her husband go down, clung to her son...

Mrs. Anna Fitzgerald of 5216 West 23rd Place told of saving herself and five-year-old son, Edward, from the Eastland Disaster. She watched her husband go down, but clung to her son. Her husband, William Fitzgerald, was missing, and she said he drowned.

"The three of us were on the deck, and we were thrown into the water," Anna said. "I seized my son, Edward, while the boat was tipping, and after we struck the water I clung to him around the neck. We drifted toward the wharf, and I caught hold of some piling and half pulled myself up. I shoved little Edward up to some men, who reached down and grabbed him. That was the last time I saw him, but I know he was saved. I clung to some piling until some men pulled me up. My husband disappeared after I struck the water with my boy, and he was drowned, for he couldn't swim."

Joseph and Anna's older son, William Walter Fitzgerald, had to be at work and could not accompany his family to the picnic that fateful day. He came to the wharf as the tragedy claimed the lives of his father and younger brother.