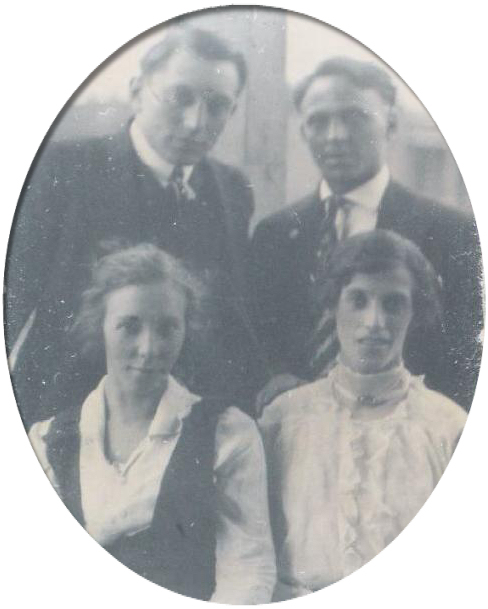 (Pictured: Right front to back: Rachel and Harry Foster)

Harry Foster worked as a telephone assembler for the Western Electric Company. He and his wife of three years, Rachel Hill Foster, lived at 415 S. Western Avenue in Chicago. They were both 25 years old. As part of their plans to attend the picnic, they invited Rachel's sister and her husband, Bill and Bessie Kolas, to accompany them as their guests.

Bill and Bessie made plans to join Harry and Rachel, but had to change them right before the event because Bill had to work. Their lives were spared that day. Harry and Rachel Foster, however, lost their lives in the Eastland Disaster. Rachel was one of the early ones found, but she was already dead. Rachel's mother, Anna Hill Klein, had to identify the bodies of her daughter and son-in-law.

The Eastland Disaster was the second tragedy that Anna Hill Klein had endured after immigrating from Norway. Her first husband and father of Rachel, Peter Hill (of Denmark), lost his life on July 26, 1892, when he fell from a bridge while working for the city of Chicago as it prepared for the World's Fair of 1893. He had only been in the United States a few years when the tragedy occurred, leaving Anna Hill alone with three small children. Anna's second husband, George Klein, died in January of 1915, just a few months before Rachel and Harry's death.