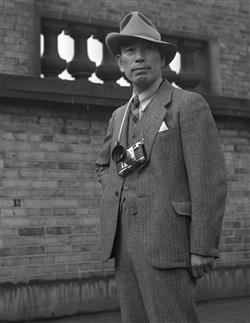 …captured some of the most notable photographs of the Eastland Disaster…

Junnosuke “Jun” Fujita was the first Japanese-American photojournalist and captured some of the most notable photographs of the Eastland Disaster.

Jun was born on December 13, 1888, in Nishimura, a village near Hiroshima, Japan. When he was older, he immigrated from Japan to Canada, where he worked odd jobs to save enough money to move to America. He moved to Chicago where he attended and graduated from Wendell Phillips Academy High School, a four-year predominantly Black public school whose notable alumni included Nat "King" Cole. Following his high school graduation, he studied mathematics at the Armour Institute of Technology, which later became the Illinois Institute of Technology, with plans to become an engineer.