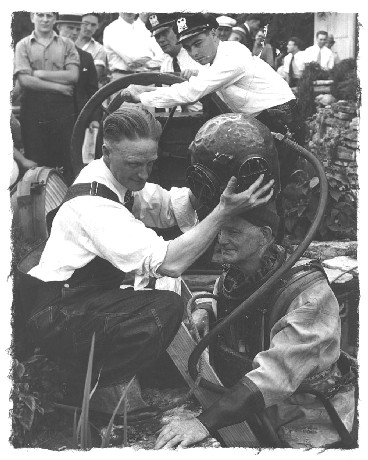 ...lost consciousness on the upward journey...

Charles Gunderson was the proprietor of Chas. Gunderson and Son Submarine Divers. His biggest job was diving for bodies of the Eastland Disaster. He dived almost continuously for four days, staying underwater two to five hours at a time, groping his way into the pleasure boat's grand ballroom where many were trapped.

Charles Gunderson came closer than any of the divers, grave though their peril, to losing his life. The story he brought back to the surface with him was the most thrilling of all.

"I was down in the dance deck," he said, "when I got mixed up with some twisted stanchions. I had jerked the signal cord a half dozen times before I discovered it must be fouled above - and I hadn't started jerking it until I was satisfied I couldn't get free by myself.

"It was as tight a place as I ever had been in. And then I made another discovery. My air tube had fouled, too, and I couldn't breathe. I was down there alone without air. Those above had no way of knowing what I was up against. It was up to me to live or die.

"I kicked until I must have been blue in the face, and then, all of a sudden, I was free. I took a step and the signal cord was cleared. Air began to come through the tube, but not enough of it to do me much good. You can bet I gave the cord a jerk!"

Gunderson lost consciousness on the upward journey, and it was a half hour before he recovered. Still weak, he insisted on going into the hull again.