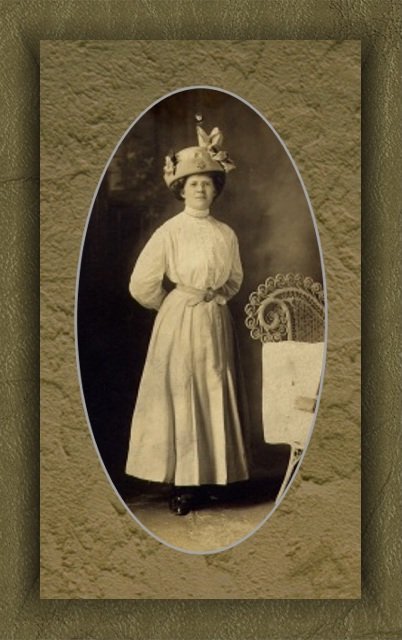 ...people grabbed at her body and feet...

Genevieve Hajek said the one thing in her life that she will never forget is the sinking of the Eastland in the Chicago River on July 24, 1915. On that day in Chicago she was a passenger on the ill-fated vessel.

The event was the Western Electric Company picnic cruise to Michigan City, Indiana. There was a big parade by the employees and Genevieve was the parade captain. Her family was against her taking the trip because they feared the boat would sink. She told her family that she was going whether it sank or not, especially since she had gone to all of the work of making her uniform for the parade.

Genevieve said there was a lot of excitement and the crowd of 2,500 aboard the vessel was happy.

Shortly before the ship cast off a man ran up from below yelling that the ship was taking on water. No one paid any attention to him and the rope was cast off from the boat, the whistle sounded and the band in the bow began to play, "It's a Long Way to Tipperary."

Then the Eastland began to flounder.

Genevieve was on the starboard side. She watched the musicians throw their instruments into the river and leap in after them. Although she could not swim, she ran to the rail to jump over, hoping to grab one of the crates floating in the river to support her. Before she could jump, the ship pitched over on its side and settled to the bottom with its starboard side sticking out. Still clinging to the rail, Genevieve was thrown neck deep into the river.

People grabbed at her body and feet and stepped on her hands and fingers as they were thrown off of the capsized ship. She was so frightened that she didn't even think of praying as she clung to the rail. She had no idea how long she hung there before rescuers found her. They put a rope around her and, after prying her fingers loose from the rail, they pulled her to the side of the boat.

After the tragedy, Genevieve would not go on another boat and she could not go near Lake Michigan without feeling like she was choking.