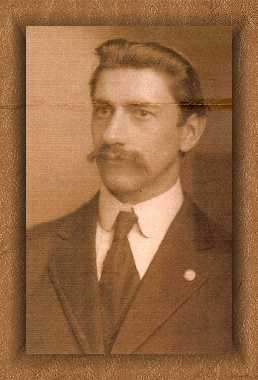 … he made many trips to the large Shenandoah Garage …

Otto Muchna was an undertaker with a funeral chapel on Central Park Avenue near 27th Street on Chicago's west side, a neighborhood where many Western Electric employees lived. When the Eastland capsized, Otto began receiving calls.

By horse and carriage, he made many trips to the large Shenandoah Garage on Damen Avenue. Many of the bodies, if not all, were brought to the garage and held there for pickup. There were so many bodies at the funeral chapel that there was not enough room for them. Otto took down the large roll-a-way doors from the room where the carriages were washed and used them to hold the bodies. He set the doors on the ground with a box under one end so each body would have the head higher.

Jerry Muchna, son of Otto, recalled: "My dad did all of the embalming and my mother did the make-up and hair dressing. They worked continuously and were just worn out … it was day and night work for several days. I remember that the poor horses were also worn out because of the many trips to the cemeteries. It took many trips to the Shenandoah Garage to pickup the bodies and then all the trips to the cemeteries which were up to fourteen miles away. My dad would return from the cemetery, embalm and prepare another body for burial. It was just too much work for both my dad and my mother, but they did their best."