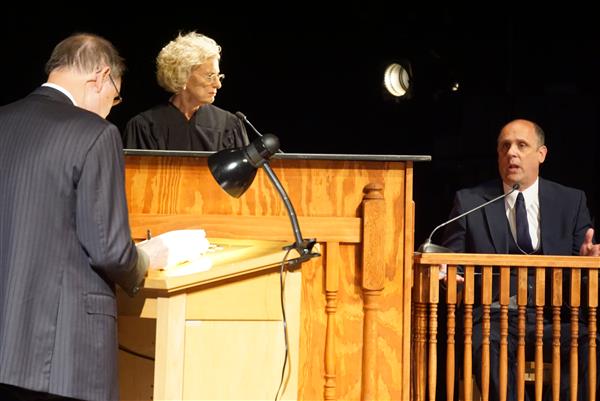 Chicago, Illinois -- The Eastland Disaster Historical Society hosted the mock retrial fundraising event "The Chicago Trial That Never Was" last Thursday, June 18 at the Harold Washington Library Center. Proceeds from the fundraiser benefitted EDHS as the organization strives to support the historical research and preservation of the history of the Eastland Disaster – Chicago’s greatest loss-of-life tragedy.

After the Eastland Disaster killed 844 of its 2,500+ passengers on July 24, 1915, the criminal case was tried by a bench trial (no jury, only a judge). In August 1915, a grand jury indicted six men for their roles in the Disaster, including the president, vice-president and two administrators of the St. Joseph-Chicago Steamship Co., as well as the ship’s captain and engineer. In February 1916, a federal judge in Grand Rapids, Michigan declared the defendants "not guilty." Following the criminal trial, the court denied extradition of the defendants from Michigan to Illinois.

The mock retrial chose to charge three of the six men with involuntary manslaughter — the president, vice-president and secretary-treasurer of the St. Joseph-Chicago Steamship Co.

Bob Clifford aimed to prove the involuntary manslaughter charge by focusing on two areas. First, the prosecution highlighted the defendants’ alleged negligence in not testing the Eastland's stability after the federal government mandated additional lifeboats be added to it after the Titanic sank in 1912. Those lifeboats likely contributed to the capsizing. The prosecution's second point included a letter written in August 1913 by naval architect John Devereux York warning the U.S. harbor master that: “You are aware of the condition of the S.S. Eastland. There may be a serious accident.”

Dan Webb objected to the letter stating that it was hearsay. He claimed that because his clients had purchased the ship after the letter was written, they never read it. He also added that the letter’s author was not a witness and could not be cross-examined. The defense instead focused on seven “undisputed facts inconsistent with recklessness,” which included the U.S. government certifying the Eastland as “seaworthy” and safe to carry 2,500 passengers.

The six-person jury returned a split verdict: Five voted "not guilty" while one voted "guilty." The Chicago Daily Law Bulletin stated that "the lone guilty vote came from Carla Gerts, who cited failure of the owners to test the ship after the addition of the lifeboats, which she felt they should have done 'regardless of the fact that the federal government said it was seaworthy.'" Event attendees -- more than 300 -- also served as a jury and were given remote controls with the instructions to vote "all not guilty," "all guilty," or "some but not all guilty." The audience voted 58% "not guilty," 29% "guilty," and 13% “some but not all guilty.”