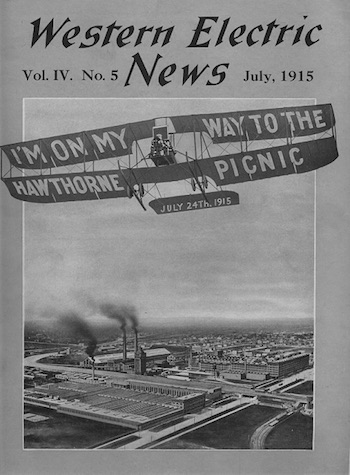 Happy International Picnic Day from EDHS! Today, we remember those who embarked on Hawthorne Works’ 5th Annual Employee Picnic and were involved in the Eastland Disaster.

Hawthorne Works operated six days a week, but for one Saturday every summer, the plant shut down for a day of laughter, joy, and relaxation. Men and women donned their best clothes for a day of games, parades, and fun. Western Electric Company hosted its first company picnic in 1881, but the picnics did not become grandiose until the Hawthorne Club, a social club run by Western Electric Company employees, began hosting its annual picnic to Michigan City, Indiana, in 1911.

The Hawthorne Club chartered the Eastland for the 1914 picnic, but the ship experienced issues unloading passengers at Michigan City, which caused her not to meet her schedule. To avoid this issue for the 1915 picnic, the Hawthorne Club altered its contract to have the Eastland as the first ship to depart. Prior to the 1915 season, the Eastland underwent numerous changes, including new concrete on decks, new boiler tubes, and more lifeboats added. The combination of these events proved disastrous.

Since the 1914 picnic was a rousing success, the picnic committee vigorously promoted the event and encouraged all to come. The majority of Western Electric employees were young, single, and in the dating age; therefore, people unaffiliated with the Western Electric also purchased tickets for the event. The 1915 picnic was also to include a parade, games, and delicious food, but unfortunately, tragedy struck, and the picnic never occurred.

As you celebrate International Picnic Day, please remember those who were involved in one of Chicago’s greatest tragedies. And, stay tuned to find out what happened to the Hawthorne Works’ Annual Employee Picnic!