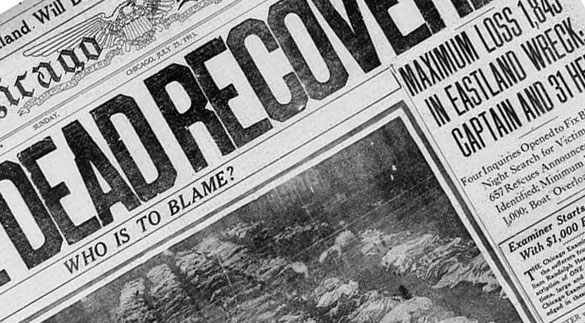 Chicago, Illinois -- 20-year-old Joseph Mootz lived at 1927 N. Keeler Avenue in Chicago. On the morning of July 24, 1915, Joseph was on a streetcar when he saw the commotion at the Eastland Disaster.

He jumped into the Chicago River to rescue those struggling in the water, and was killed. It is believed that while pulling someone to the dock, he was struck in the back of the neck with something sharp.

The Chicago Daily News published an article after the disaster, stating: "He was a Chicago boy, and Chicago is proud to know him ... Of splendid physique, herculean in strength, an expert swimmer, he saved many lives, diving again and again, never coming up empty handed."
Joseph's funeral was held at St. Philomena's Church where he was a member. It was said to have been a beautiful tribute. Joseph is buried at St. Boniface Cemetery. He left behind his parents Michael and Mary, four brothers, and two sisters.
Joseph's story was recently submitted to us by his cousin. Joseph is only one of two known victims to not have been aboard the Eastland.
SHARE
Share on Facebook Share on Twitter Share on Pinterest Share on Email