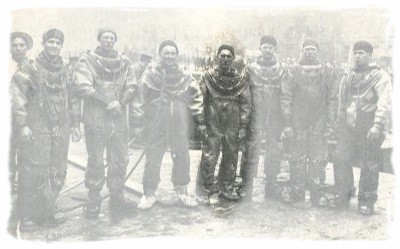 "REMEMBERING THE HEROES": OTHER HEROES AT THE SCENE

Chicago, Illinois -- As we bring our "Remembering the Heroes" series to a close, we wanted to share a few more stories of other heroes who aided in the rescue and recovery efforts of the Eastland Disaster.

Abraham Isaac Blumenthal was an immigrant from England who came to America with his family in 1902. Abraham was selling newspapers on the dock alongside of the Chicago River on July 24, 1915. He was responsible to pay the newspaper company for each and every newspaper, even those he could not account for. Without concern for the money he might owe for missing newspapers, and as the Eastland Disaster unfolded right before him, he threw down his newspapers and jumped into the river to help pull people out.

Anthony Neubauer was a great swimmer and diver and was known to have a perfect jack-knife. When Anthony heard about the tragedy, he jumped on a streetcar and headed downtown to help out in any way that he could. As soon as he arrived, he jumped in and started pulling people out. His efforts soon became that of a recovery diver, pulling victims from the river.

George Alfred Saunders, Sr. was born in Massachusettes and spent the early years of his life on the East coast. He came to Chicago and was employed by Joe Falcon, diving contractor. He later entered the service of the City of Chicago were he made the acquaintance of Dan Donovan. Saunders and Donovan took the first examination for city divers, worked as partners, and were the only divers directly in the employ of the City of Chicago for a considerable time. George was one of the divers who had the grizzly task of assisting in the recovery efforts of the tragedy.

Edward Zimmerman was a welder/burner who owned a welding shop on the 4100 block of West Lake Street. He was called to help in the rescue efforts, and had a hard time getting through the crowds of people as he carried two tanks of oxygen on his shoulders. Edward worked for 48 straight hours cutting holes in the hull of the Eastland to get people out. He was later awarded a star by Cook County Coroner Peter Hoffman.