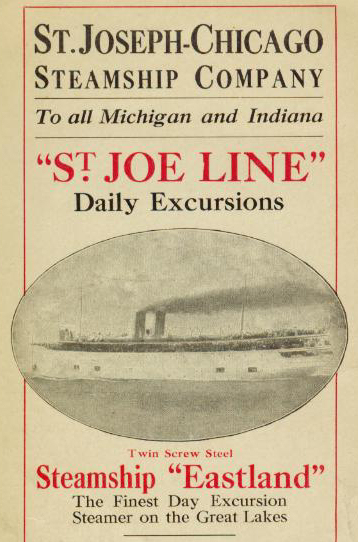 Chicago, Illinois -- Bert Cross was a Western Electric Company employee who knew of the Eastland’s reputation as a cranky ship before he boarded the vessel. He wrote his mother on July 26, 1915, informing her of his survival.

Bert and five coworkers from his department were on the promenade deck, near of the center of the boat, and packed like sardines when the ship began to list toward the river. When the Eastland began to list, he was not concerned; Bert believed she would straighten again. However, the ship listed to the point of no return and sank into the Chicago River. He described the true desperation of people fighting, scraping for breath and life at any cost:

“The whole river was a mass of struggling humanity, when hundreds were drowning before my eyes. You have probably read about it in the papers but no one can picture the horror of the scene. Men and women covered with blood from broken windows, children and girls struggling in the water calling for help and the people trapped within the boat who never had a chance for their life. The ones in the water were soon recovered if they were alive, but in the cabins, staterooms and on the lower decks it was hours before the steel plates could be cut into and their bodies taken out.”

While Bert survived, unfortunately, two individuals in his party did not. Read his entire letter as published in the South Haven Tribune on July 30, 1915, here.