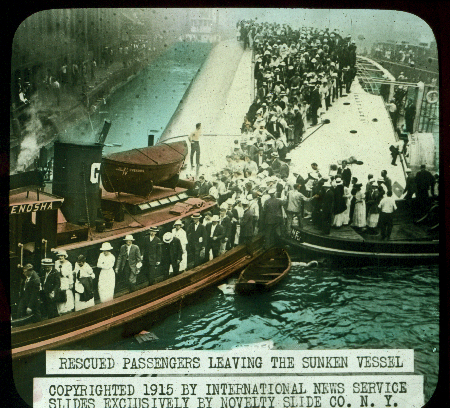 Chicago, Illinois -- Frank Blaha was an 18-year-old Western Union employee when he embarked on the cranky Eastland on July 24, 1915, with his friend, Joe Crawl. Frank, who had several friends at Western Electric Company, asked his boss for the day off to attend the Hawthorne Club 5th Annual Picnic.

After Frank and Joe boarded the ship, they made their way to the upper deck. Shortly after, the captain rang to the bell to signal the crew to draw in the gangplank. Suddenly, laughter and glee turned into screams and cries. Frank recalled the horrors he witnessed:

"We were on the top deck by the cabin. There were a lot of people down below. They had the band down there, and a lot of people stayed down there to dance. We were just fortunate we went up on top. It was kind of drizzling, but we didn't mind it. The boat was at the shore. A tugboat came to pull the Eastland out into the lake, and the bell rang to signal that we were ready to go. In a short time the captain came out on the ship, and he said, 'I'm not leaving until this boat straightens out.' It was already starting to lean.

"Then a short time later - it was just a few minutes - and it was one big bang, and the boat turned over. The ropes from the boat to the dock hadn't even been untied. My buddy and I went down a flight of stairs, and we were able to get over an iron rail so we could slide down the side of the hull. It was on top of the water by this time. We stood on the hull to wait for a rowboat to come by. We could see people already in the water and they were hanging onto ropes, husbands, chicken crates - anything they could grab. They had all those loose folding chairs on the ship and all this glass and the piano that all began sliding when the ship started to tip. The people couldn't hold onto anything. It just went down that fast. And the people on that side - the side toward the center of the river - didn't have a chance. They just rolled right under.

"When you say over 800 people drowned out of over 2,000, and the ship never moved from shore, people can't believe it.

"All that week it was just like tears falling from the sky. It was cloudy and dreary, and the shops were closed down and everyone was mourning. It was just a sight you couldn't believe."

Frank and Joe survived the disaster by crawling over the rail onto the hull of the boat, where they remained until an oar boat passed by them. Once safely on shore, Frank and Joe went to a tavern on Clark Street, and Frank asked the tavern owner to go across the street and call his mother.