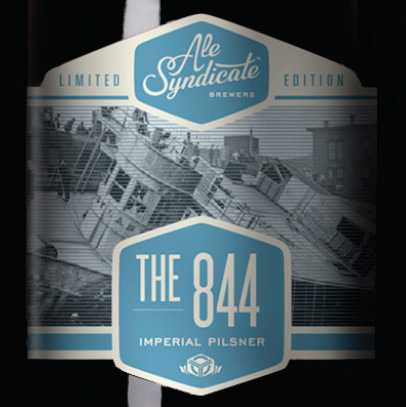 Chicago, Illinois -- The Eastland Disaster Historical Society (EDHS) announces the release of “The 844,” a commemorative beer brewed by Ale Syndicate Brewers for the 100th anniversary of the Eastland Disaster that will be distributed by Lakeshore Beverage.

Liz Garibay, Principal at History On Tap and EDHS board member, conceived the idea by combining her passion for Chicago history with an equal passion for craft beer. She met with Ale Syndicate Brewers, a local craft beer brewery that shares the same passion for Chicago history and craft beer. The two discussed ways to create a beer that would respectfully encompass the stories of victims, survivors, and first responders. Garibay said, “The 844 Commemorative Beer will present history in an innovative way, a way to build community through conversation and by sharing stories. The beer will help us reach new audiences – the Eastland Disaster is an important and often forgotten moment in our history – and it's time we change that.”

Starting July 15, The 844 will be available on draft for a limited time in Chicago area bars and restaurants. The establishments that carry The 844 will help tell the Eastland Disaster story. In addition to the draft beer, a limited edition of 844 bottles will be released in area liquor stores. Each bottle will be hand numbered and will highlight the story of one of the victims, responders, or survivors of the tragedy.

Ted Wachholz, Executive Director of EDHS said, “Every family that previewed the concept – sharing history through beer – provided overwhelmingly positive feedback. With their unanimous support we now look forward to sharing the history of the Eastland Disaster with thousands of Chicago-area residents, many who we know will be hearing the story for the first time."

A portion of the proceeds from all beer sales by Ale Syndicate will benefit EDHS.

The 844 is a smooth and full-bodied Czech imperial styled pilsner, with a nice kick of Saaz hops coming in on the finish and an ABV of 9%. The beer has been brewed and crafted in honor of the 844 who lost their lives on July 24, 1915 in the Eastland Disaster on the Chicago River. The victims were Western Electric workers, their families and friends – many of whom were Czech immigrants. On the 100th anniversary of this tragedy, we raise a glass to their memory with a crisp, golden commemorative beer inspired by their Czech heritage.

Another partner involved in making the finished product was creative agency 88 Brand Partners. Their pro bono rebranding work with EDHS created the distinctive design and labeling for the packaged goods. The 25.4 ounce bottles not only have a custom Ale Syndicate branded label, but each bottle also contains a “neck tag” depicting one of nine different people together with the story of their involvement in the Eastland Disaster.

For a full list of locations serving The 844 beer, and for more information about this partnership, visit EastlandDisaster.org/The844CommemorativeBeer.