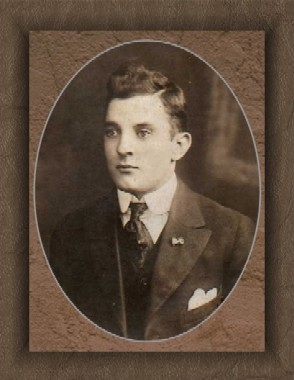 ...stood on someone's shoulder so he wouldn't drown...

Tom Chakinis fled starvation in Greece in 1911 and immigrated to Chicago where he married, reared four children, and operated two restaurants. On the morning of July 24th, 1915, Chakinis was a 21-year-old factory worker who boarded the steamer Eastland.

Chakinis survived, and in his mid 80s he still recalled the Disaster vividly. He gestured, laughed, and lapsed into snatches of Greek as he told the story he'd repeated so often.

"It was a Saturday, 7:30 in the morning," he began. Nearly 2,000 Western Electric Hawthorne plant employees and their families boarded the steamer that day in 1915, bound for a day-long company picnic in Michigan City, Indiana. As they waited for the boat to leave, they sang and nibbled at their picnic lunches," Chakinis said.

Chakinis recalled that he sat in a chair on the top deck with his friend, Ted Hallas, who pointed to the life preservers above them and told him, "Grab onto these in case of an accident." Chakinis thought little of the comment, for he'd sailed from Greece a few years before with no mishap. It mattered little anyhow, for when the boat went over, there was no time to grab anything.

"The poor people who were sitting on the other side of the boat slid, like vroooooosh," Chakinis said, making a downhill motion with his hand. Chakinis, who could not swim, slid toward the staircase leading to the lower deck, and lunged for the railing. He saw hundreds of bodies below him, bodies of people who had been on the lower deck. "I was lucky all the people was under me," he said. "I remember I was standing on somebody's shoulder so I didn't drown."

He was later pulled onto the dock by a fireman. Ted Hallas was not as fortunate. He was swept away as soon as the boat turned over.

Most survivors returned to work immediately, Chakinis recalled. "The people that survived didn't want to hear anything more about it. You tried to forget."

But Chakinis never truly forgot. Years later, he forbade his children from going near the water. He never boarded a boat again.