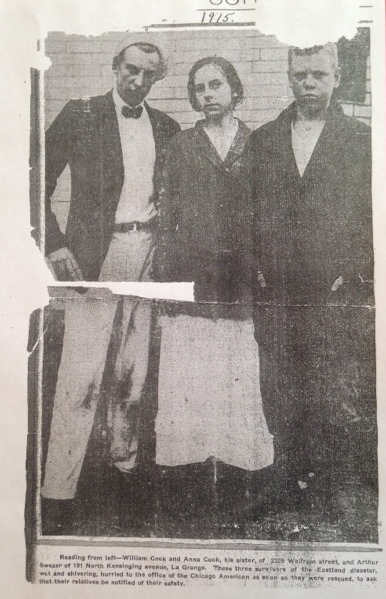 ...was one of the last rescued from inside the ship...

Anne Cook (pictured center), age 15, joined her older brother and Western Electric employee William Cook (pictured left), age 18, for a day of fun and merriment at the company excursion and picnic. Anne was only allowed to attend because another Western Electric employee and his newlywed bride agreed to chaperone her. They had left home early that morning at 5 a.m. due to the excitement and anticipated crowd.

Shortly after boarding the Eastland, William went to the top deck with friends while Anne stayed with her chaperones below deck. Anne’s chaperone was of German decent and had prior experience on ships. He noticed that the ship was in trouble when the ship started to list. He told Anne and his bride to go into the bathroom and climb up high on the toilet tanks, close to the ceiling. Anne did so, but his wife turned back to reunite with her husband.

When the ship finally capsized, Anne was left alone trapped in a small pocket of air. The bride and groom chaperones were later found dead, one on each side of the bathroom door. As the Eastland rolled into the Chicago River, William dove into the water from the upper deck with a friend who did not surface. He was a strong swimmer and helped rescue many from the water while looking for his sister. Anne was trapped for what she always described as “an eternity” until she heard someone say, “There’s no one else.” She cried out “I’m here! I’m here!” as she banged on the ceiling and wall.

Anne was one of the last rescued. First responders cut through the wall, and a firefighter pulled her out from one of the holes cut in the hull. William and Anne were reunited on the dock soaking wet.

Shortly after, the siblings hurried to the Hurst American Newspaper where their father worked as a printer. Their father had missed them in the chaos at the dock and was searching the docks for hours looking at every body for his two children. After having their picture and story taken for the front page of the Hearst Chicago Evening American by a reporter, they started home. When they caught a cable car, the conductor realized they were survivors of the Disaster. He placed an “Out of Service” sign and did not stop until returning them close to home late that afternoon. William was home only long enough to deliver his sister, change clothes, and then return to the dock to help.

William and Anne always considered themselves to be one of the very lucky families who survived that fateful day.