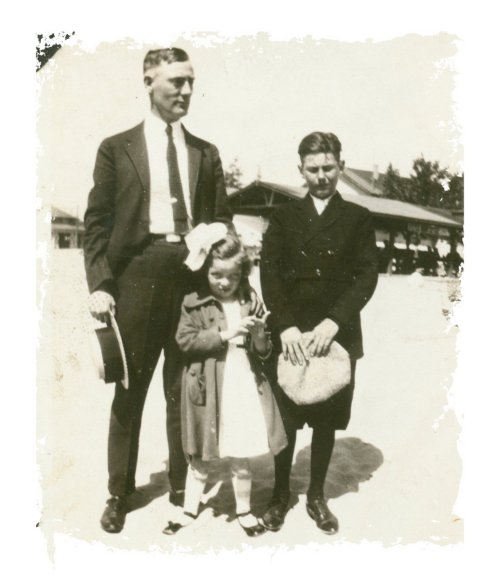 Frederic and Clara Ehrhardt took their two young children, Raymond (10) and Ione (6), on the Western Electric excursion/picnic aboard the Eastland. Frederic's brother, Henry, accompanied the family. When the Eastland rolled over, Henry was there to help his niece and nephew to safety. The tragedy, however, claimed both the lives of Frederic and Clara.

The Ehrhardts became one of 19 families that were left parentless by the tragedy. After the tragedy, young Raymond and Ione were taken in by their aunt Tillie Jensen (Clara's sister). They stayed with the Jensens for two years when financial hardships caused the family to part; Ione remained with Tillie Jensen's family while Raymond went briefly to his Uncle Henry's farm to live. A short while later, Raymond wound up at the German Lutheran Evangelical Orphanage in Addison, Illinois, where he stayed until adulthood. Ione remained in Chicago. Both siblings remained close throughout their lives. The Eastland Disaster broke apart the Ehrhardt family, separating father and mother from son and daughter, forever.

The photo above shows Henry Ehrhardt standing next to Raymond and Ione outside Clara and Frederic's funeral. The straw hat that Henry is holding is the same hat he wore on the day of the Disaster.