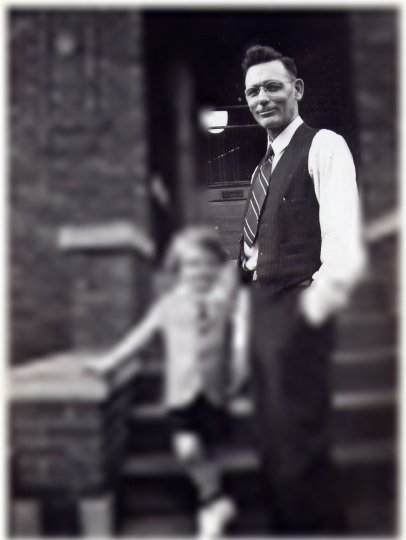 Harry (pictured above) and Ed Kleinfelder left their home on the northside of Chicago early on the morning of July 24, 1915, said goodbye to their mother, and headed downtown to board the Eastland. On the way they were joined by an employee of Western Electric, Harry's good friend Morris Dempsey.

When they reached the wharf they saw huge crowds, both already boarding and waiting to get on. It appeared to the brothers that the Eastland was listing, but they didn't think anything of it and boarded anyway. Once aboard, Harry and Ed headed for the galley to get a couple of cups of coffee, while Morris instead charged to the promenade deck because that's where the girls and his other friends were.

When Harry and Ed arrived below deck, two crew members were already mopping water that was coming in. The ship started to list even more. After a few minutes, and as Harry and Ed continued gulping their coffee, the cargo, tables, chairs, and everything else that wasn't secured started to shift. "The two crew members," Harry later said, "immediately threw aside their mops and yelled, 'Every man for himself,' and jumped out the window/porthole."

Harry and Ed were right on the tails of the two crew members. Harry gave Ed a boost and out he went, with Harry right behind. When they reached the edge they had to jump down to the wharf. They were off of the ship for only a few seconds when the ropes snapped and then "all hell broke loose." Harry remembered seeing a policeman standing on the Clark Street Bridge, pulling his hair during a moment of feeling helpless.

Harry put his brother Ed into a cab and told him to get home and tell their mom that he was okay. Word spread quickly because when Ed reached home, everyone had heard about the tragedy. Ed and Harry's mother, of course, was relieved that they were both all right.

Harry stayed on the scene to help as much as he could. Although he couldn't swim, he pulled one woman from the river by her hair. Forever grateful, the woman gave Harry her handkerchief, which was all that she had left. Harry stayed the rest of the day and the next, helping to identify the bodies of his co-workers and friends, many of whom he recognized. "I saw one covered body, with just his feet showing," he recalled later. "They were large and I knew right away that the person could only be our big, husky janitor." It was. After a couple of days, Harry returned home, the scenes etched in his mind for the rest of his life.

Back at Western Electric the following week, Harry saw that practically every other workbench or desk was draped in black. The worst part was in knowing that whole families were wiped out. Many workers sat around for days, talking in hushed tones or just flat out crying. Harry was soon assigned the task of going with others to the homes of the victims, to pay their respects and to offer money from Western Electric to help defray costs. More often than not, the victims were waked in their homes. "These were proud people," Harry said, "and many refused the money we wanted to give them, because in their grief, they either were mad at Western or were too proud to take it. They chose to bury their own."