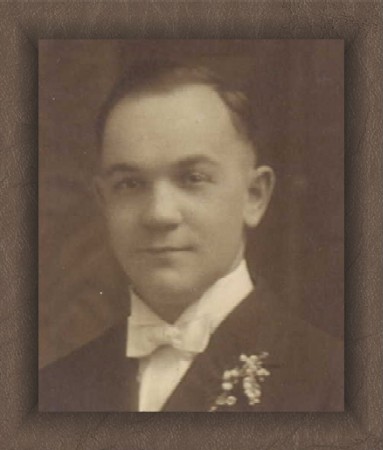 ...only spoke to his daughter once about the tragedy...

Charles Marchewka was born in Poland on August 16, 1897. When he was a small child his family moved to Southhampton, England, where his father worked for the Cunard Line. The family immigrated to Buffalo, New York, to join his grandparents and family in the early 1900s. They then moved to the Chicago area, finally settling in Cicero, Illinois.

On the morning of the Western Electric employee picnic, "Charlie," then 17, and his friends planned to board the Eastland for a day of fun. Because he and his friends were on the side of the boat that did not go under water when the boat turned on its side, they were able to help each other by making a chain of hands. In this way Charlie and his friends also helped others get to shore safely.

Charlie only spoke once to his daughter about the tragedy. There was only so much to say and after it was said he did not wish to discuss it further. He remained in the Hawthorne section of Cicero, married Hattie Miller in 1923, and had two daughters. He was an usher at St. Mary of Czestochowa Church for 30 years. With some trepidation he braved a trip on Lake Michigan when he sailed to Mackinac Island. He enjoyed the trip and fed the sea gulls that followed the ship. Charlie died on June 25, 1965.