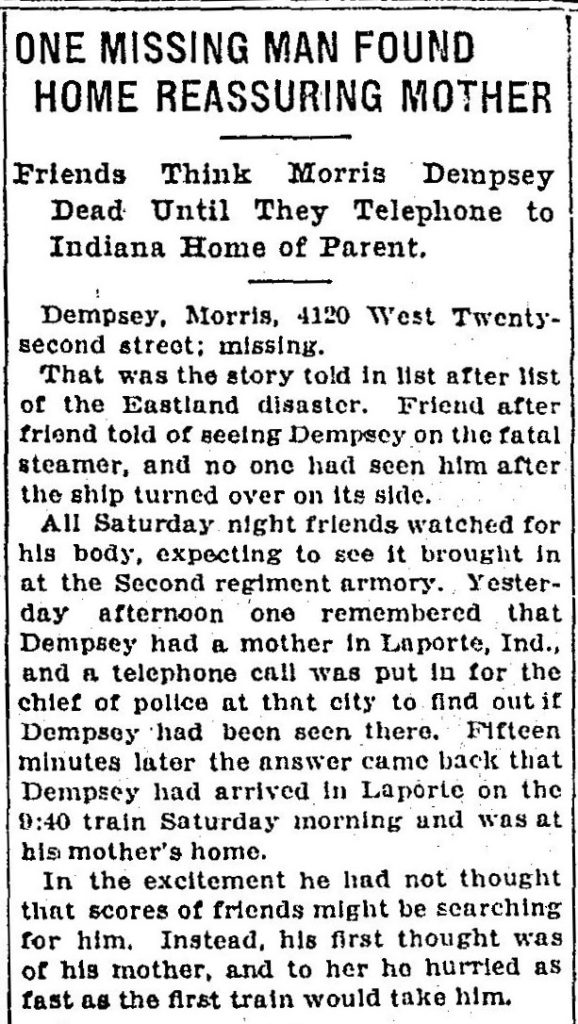 Chicago, Illinois -- Morris Dempsey, Harry Kleinfelder, and Harry’s younger brother Ed were all good friends who planned to spend July 24, 1915, playing games, laughing, and enjoying the day off from work.

Before they reached the wharf, Morris, whom Harry described as a “happy-go-lucky-Irishman,” stopped at a liquor store to buy a bottle of the “good stuff” in case the picnic was boring or the ladies were thirsty.

Once the three young men reached the wharf, they noticed the Eastland was listing, but they were not concerned and boarded the ship. After boarding, Harry and Ed went to the gallery for a couple cups of coffee. Morris, on the other hand, headed for the promenade deck to mingle with the ladies and his other friends.

Once the Eastland sank into the Chicago River, Morris swam to safety and immediately boarded the next train to La Porte, Indiana, to reassure his mother he was safe. Morris’s friends reported him missing after seeing him on the ill-fated ship but then failing to see him near his home at 4120 West Twenty Second Street. Morris reported he did not think his friends would report him missing. His only concern was reaching his mother as quickly as possible.

The newspaper article, “One Man Missing Home Reassuring Mother,” is from the Chicago Tribune’s July 26, 1915, edition.